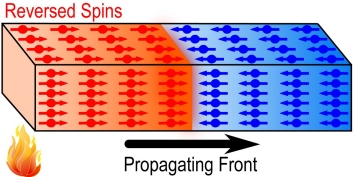 The propagation of the so-called ‘magnetic fire’ in certain systems seems to be “the only combustion process ruled by quantum laws known in the nature”, points out Javier Tejada, Professor of Condensed Matter Physics at the University of Barcelona and one of the authors of a study recently published on the journal Physical Review Letters (PRL), which uncovers how energy is released and dispersed in magnetic materials in a process akin to the spread of forest fires.

The study, carried out by researchers from New York University (NYU), the University of Barcelona, the City University of New York (CUNY), and the University of Florida, has enabled to control some aspects of the reaction by magnetic fields manipulation. Besides, such knowledge of magnetic reactions is important in designing magnetic materials for energy storage applications. This is because magnetic fire can lead to a rapid and uncontrolled release of stored energy, producing significant energy loss in, for example, an electrical generator.