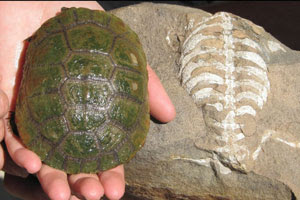 An anatomy professor at New York Institute of Technology College of Osteopathic Medicine has contributed to a published study that provides clues on the early evolution of one of nature’s unique developments:  the turtle shell.

Assistant Professor Gaberiel Bever, Ph.D., is part of a team maintaining that the 260-million-year-old reptile from South Africa, Eunotosaurus africanus, is the earliest known version of a turtle, in part because of its distinctive T-shaped ribs. Those ribs, said Bever, represent an early step in  the evolutionary development of the carapace, the hard, upper part of the shell of today’s turtles.