Conservatives can be persuaded to care more about the environment, study finds 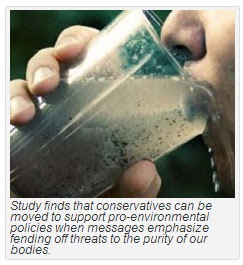 When it comes to climate change, deforestation and toxic waste, the assumption has been that conservative views on these topics are intractable. But new research from the University of California, Berkeley, suggests that such viewpoints can be changed after all, when the messages about the need to be better stewards of the land are couched in terms of fending off threats to the “purity” and “sanctity” of Earth and our bodies.

A UC Berkeley study has found that while people who identified themselves as conservatives tend to be less concerned about the environment than their liberal counterparts, their motivation increased significantly when they read articles that stressed the need to “protect the purity of the environment” and were shown such repellant images as a person drinking dirty water, a forest filled with garbage, and a city under a cloud of smog.