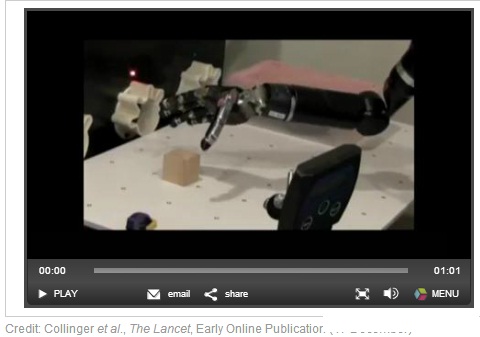 A 53-year-old woman paralyzed from the neck down by a genetic neurodegenerative condition has learned to manipulate a robotic arm with her thoughts, researchers report today in The Lancet. In the video above, she uses the arm to remove plastic cones stacked on a base and restack them one by one on another base. Surgeons had implanted two 4x4-millimeter grids of hair-thin electrodes in her brain to capture signals from regions involved in planning hand and arm movements. A computer translated those signals into commands to move the robotic arm, which has nearly the same movement capabilities as the real thing.