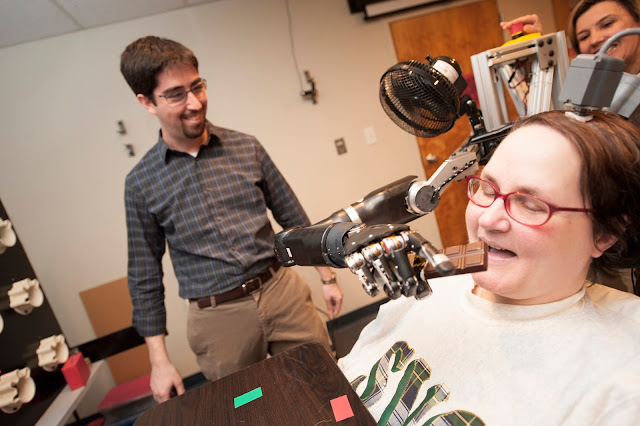 (December 16, 2012)  Reaching out to “high five” someone, grasping and moving objects of different shapes and sizes, feeding herself dark chocolate. For Jan Scheuermann and a team of researchers from the University of Pittsburgh School of Medicine and UPMC, accomplishing these seemingly ordinary tasks demonstrated for the first time that a person with longstanding quadriplegia can maneuver a mind-controlled, human-like robot arm in seven dimensions (7D) to consistently perform many of the natural and complex motions of everyday life.

In a study published in the online version of The Lancet, the researchers described the brain-computer interface (BCI) technology and training programs that allowed Ms. Scheuermann, 53, of Whitehall Borough in Pittsburgh, Pa. to intentionally move an arm, turn and bend a wrist, and close a hand for the first time in nine years.

Less than a year after she told the research team, “I’m going to feed myself chocolate before this is over,” Ms. Scheuermann savored its taste and announced as they applauded her feat, “One small nibble for a woman, one giant bite for BCI.”