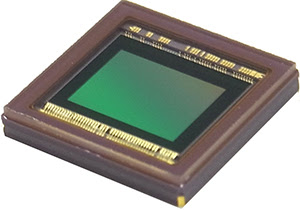 Sampling of the new sensor will begin at the end of January 2013 and mass production will follow in August 2013.