How the common 'cat parasite' gets into the brain 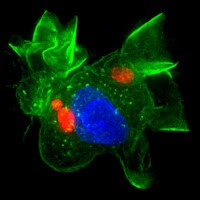 Toxoplasma is a common 'cat parasite', and has previously been in the spotlight owing to its observed effect on risk-taking and other human behaviours. To some extent, it has also been associated with mental illness. A study led by researchers from Karolinska Institutet now demonstrates for the first time how the parasite enters the brain to influence its host.