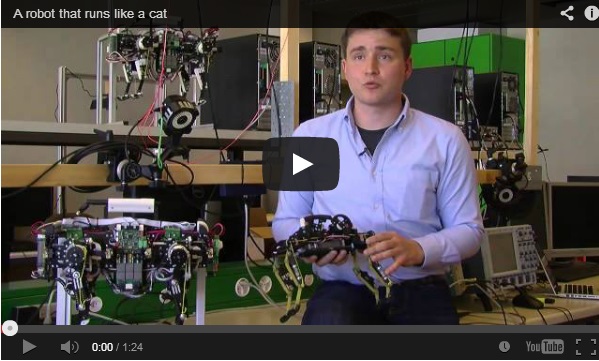 Thanks to its legs, whose design faithfully reproduces feline morphology, EPFL’s four-legged “cheetah-cub robot” has the same advantages as its model: it is small, light and fast. Still in its experimental stage, the robot will serve as a platform for research in locomotion and biomechanics.

Even though it doesn’t have a head, you can still tell what kind of animal it is: the robot is definitely modeled upon a cat. Developed by EPFL’s Biorobotics Laboratory (Biorob), the “cheetah-cub robot,” a small-size quadruped prototype robot, is described in an article appearing today in the International Journal of Robotics Research. The purpose of the platform is to encourage research in biomechanics; its particularity is the design of its legs, which make it very fast and stable. Robots developed from this concept could eventually be used in search and rescue missions or for exploration.