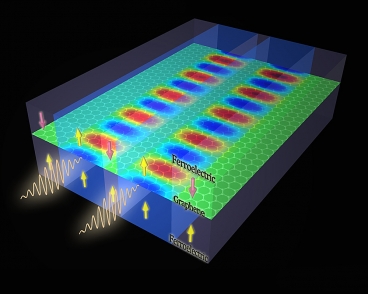 Researchers at MIT have proposed a new system that combines ferroelectric materials — the kind often used for data storage — with graphene, a two-dimensional form of carbon known for its exceptional electronic and mechanical properties. The resulting hybrid technology could eventually lead to computer and data-storage chips that pack more components in a given area and are faster and less power-hungry.

The new system works by controlling waves called surface plasmons. These waves are oscillations of electrons confined at interfaces between materials; in the new system the waves operate at terahertz frequencies. Such frequencies lie between those of far-infrared light and microwave radio transmissions, and are considered ideal for next-generation computing devices.