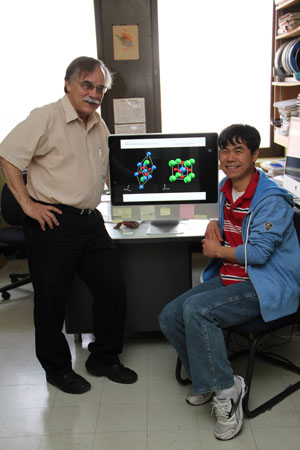 Materials scientists at the U.S. Department of Energy’s (DOE) Ames Laboratory  have found an accurate way to explain the magnetic properties of a compound that has mystified the scientific community for decades.

The compound of lanthanum, cobalt and oxygen (LaCoO3) has been a puzzle for over 50 years, due to its strange behavior. While most materials tend to lose magnetism at higher temperatures, pure LaCoO3 is a non-magnetic semiconductor at low temperatures, but as the temperature is raised, it becomes magnetic. With the addition of strontium on the La sites the magnetic properties become even more prominent until, at 18 percent strontium, the compound becomes metallic and ferromagnetic, like iron.