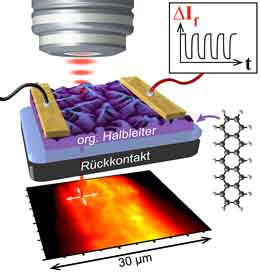 Researchers at LMU have developed a new method for visualizing material defects in thin-film solar cells.

An LMU research team led by Bert Nickel has, for the first time, succeeded in functionally characterizing the active layer in organic thin-film solar cells using laser light for localized excitation of the material. The findings are reported in the scientific journal “Advanced Materials”. “We have developed a method in which the material is raster-scanned with a laser, while the focused beam is modulated in different ways, by means of a rotating attenuator for instance. This enables us to map directly the spatial distribution of defects in organic thin films, a feat which has not previously been achieved,” explains Christian Westermeier, who is first author of the new study.