It's Battlestar China! Media passes off sci-fi pictures as aircraft carrier of the future 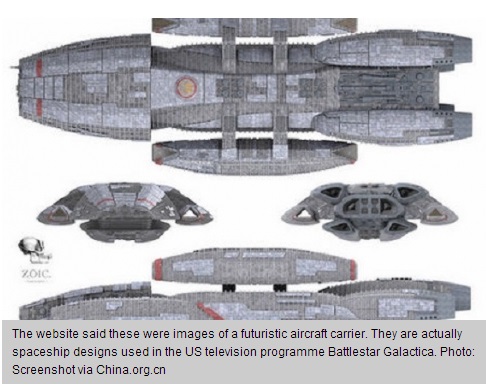 When a Chinese news portal ran a piece about aircraft carriers of the future, its editors wanted to illustrate it with a selection of hi-tech images.

But they may have stepped slightly too far into the future, as the accompanying pictures that appeared on the site showed designs for spaceships featured in the US smash sci-fi show Battlestar Galactica.

The article, entitled '4 Major Trends In Aircraft Carrier Development', was published on the Japanese language version of the China Internet Information Centre, a web portal authorised by the Chinese government which features official news translated into a variety of languages, including Japanese, Korean and English.