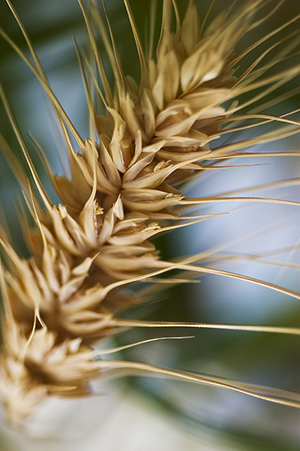 Analysis of the genome of one of world’s ‘big three’ food crops provides clues to better breeding, higher yield

Bread wheat (Triticum aestivum) is one of the “big three” globally important crops, accounting for 20% of the calories consumed by people. Fully 35% of the world’s 7 billion people depend on this staple crop for survival. Now an international team of scientists, including a group from Cold Spring Harbor Laboratory (CSHL), has completed the first comprehensive analysis of its full genome.

The study reveals the evolution of bread wheat from ancestral strains through to its current domesticated form. Due to the complexity of the plant’s genome the analysis proved a technically challenging.  But the potential payoff is large: developing new strategies for breeding and improving wheat crops.

To put the huge size of the bread wheat genome into context, its constituent number of paired DNA bases, or nucleotides, totals 17,000,000,000 base-pairs (17 Gb).  This is about five times the amount of DNA in the human genome. However, as much as 80% of the bread wheat genome consists of repetitive sequences. Because of the way genomes are usually sequenced – by stitching together hundreds of millions or billions of tiny fractions of a full genome -- the bread wheat genome’s size makes it very hard to determine which part of the genome any particular sequence readout has come from, and whether it is a unique or repeat sequence.