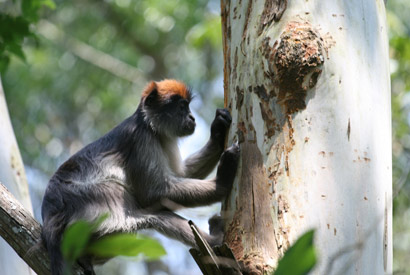 Eating certain veggies not only supplies key nutrients, it may also influence hormone levels and behaviors such as aggression and sexual activity, says a new study led by researchers at the University of California, Berkeley, that could shed light on the role of diet in human evolution.

The research is the first to observe the connection between plant-based estrogenic compounds, or phytoestrogens, and behavior in wild primates — in this case, a group of red colobus monkeys in Uganda.

The more the male red colobus monkeys dined on the leaves of Millettia dura, a tropical tree containing estrogen-like compounds, the higher their levels of estradiol and cortisol. They also found that with the altered hormone levels came more acts of aggression and sex, and less time spent grooming — an important behavior for social bonding in primates.