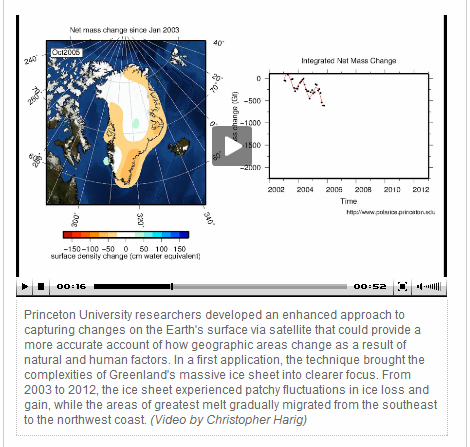 An enhanced approach to capturing changes on the Earth's surface via satellite could provide a more accurate account of how ice sheets, river basins and other geographic areas are changing as a result of natural and human factors. In a first application, the technique revealed sharper-than-ever details about Greenland's massive ice sheet, including that the rate at which it is melting might be accelerating more slowly than predicted.

Princeton University researchers developed a mathematical framework and a computer code to accurately capture ground-level conditions collected on particular geographic regions by the GRACE satellites (Gravity Recovery And Climate Experiment), according to a report in the Proceedings of the National Academy of Sciences. A joint project of NASA and the German Aerospace Center, GRACE measures gravity to depict how mass such as ice or water is distributed over the Earth's surface. A change in GRACE data can signify a change in mass, such as a receding glacier.