The cerebral cortex of Albert Einstein: a description and preliminary analysis of unpublished photographs 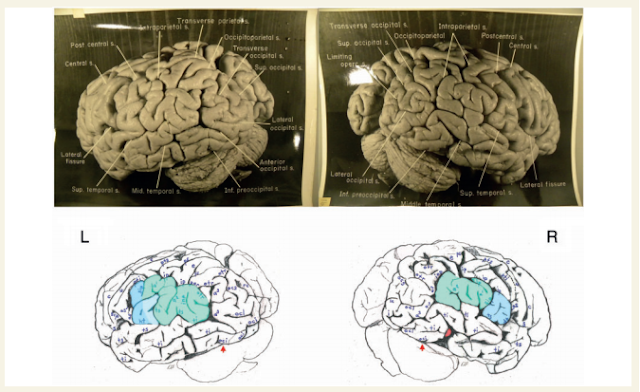 Upon his death in 1955, Albert Einstein’s brain was removed, fixed and photographed from multiple angles. It was then sectioned into 240 blocks, and histological slides were prepared. At the time, a roadmap was drawn that illustrates the location within the brain of each block and its associated slides. Here we describe the external gross neuroanatomy of Einstein’s entire cerebral cortex from 14 recently discovered photographs, most of which were taken from unconventional angles. Two of the photographs reveal sulcal patterns of the medial surfaces of the hemispheres, and another shows the neuroanatomy of the right (exposed) insula. Most of Einstein’s sulci are identified, and sulcal patterns in various parts of the brain are compared with those of 85 human brains that have been described in the literature.