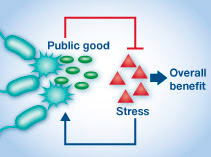 Scientists have engineered bacteria that are capable of sacrificing themselves for the good of the bacterial population. These altruistically inclined bacteria, which are described online in the journal Molecular Systems Biology, can be used to demonstrate the conditions where programmed cell death becomes a distinct advantage for the survival of the bacterial population.

“We have used a synthetic biology approach to explicitly measure and test the adaptive advantage of programmed bacterial cell death in Escherichia coli,” said Lingchong You, senior author of the study and an associate professor at the Department of Biomedical Engineering, Duke University, and the Duke Institute for Genome Sciences & Policy. “The system is tunable which means that the extent of altruistic death in the bacterial population can be increased. We are therefore able to control the extent of programmed cell death as well as test the benefits of altruistic death under different conditions.” The lead author of the study is Yu Tanouchi, a graduate student in the Department of Biomedical Engineering. Anand Pai and Nicolas Buchler also contributed to the work.