A patient’s budding cortex — in a dish? 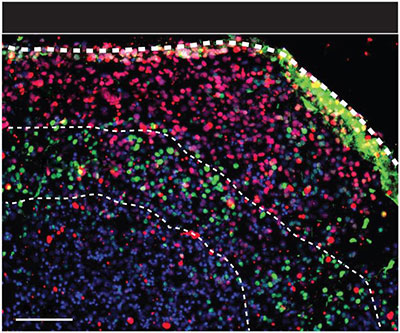 (May 29, 2015)  A patient tormented by suicidal thoughts gives his psychiatrist a few strands of his hair. She derives stem cells from them to grow budding brain tissue harboring the secrets of his unique illness in a petri dish. She uses the information to genetically engineer a personalized treatment to correct his brain circuit functioning. Just Sci-fi? Yes, but...

An evolving “disease-in-a-dish” technology, funded by the National Institutes of Health (NIH), is bringing closer the day when such a seemingly futuristic personalized medicine scenario might not seem so far-fetched. Scientists have perfected mini cultured 3-D structures that grow and function much like the outer mantle – the key working tissue, or cortex — of the brain of the person from whom they were derived. Strikingly, these “organoids” buzz with neuronal network activity. Cells talk with each other in circuits, much as they do in our brains.