'Supercool' material glows when you write on it 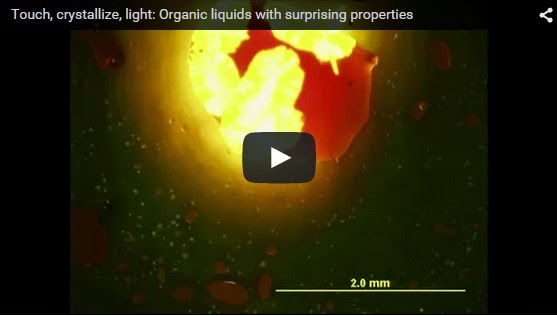 (May 13, 2015)  A new material developed at the University of Michigan stays liquid more than 200 degrees Fahrenheit below its expected freezing point, but a light touch can cause it to form yellow crystals that glow under ultraviolet light.

Even living cells sitting on a film of the supercooled liquid produce crystal footprints, which means that it's about a million times more sensitive than other known molecules that change color in response to pressure.

The material could have applications as a new kind of sensor for living cells, while the mechanism behind its unusual properties may guide the development of electronics and medicines.

"As you know, water freezes around zero degrees Celsius. It changes to ice. It's as if the water remained a liquid down to -100 degrees Celsius," said Kyeongwoon Chung, U-M doctoral student in materials science and engineering and first author on the paper published today in ACS Central Science.