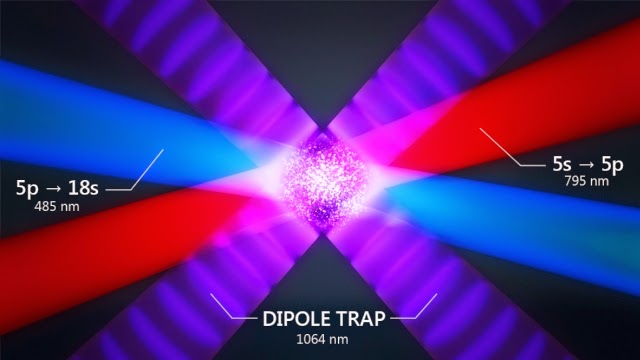 (May 11, 2015)  Rydberg atoms, atoms whose outermost electrons are highly excited but not ionized, might be just the thing for processing quantum information.  These outsized atoms can be sustained for a long time in a quantum superposition condition---a good thing for creating qubits---and they can interact strongly with other such atoms, making them useful for devising the kind of logic gates needed to process information.   Scientists at JQI and at other labs are pursuing this promising research area.

One problem with Rydberg atoms is that in they are often difficult to handle.  One approach is to search for special wavelengths---“magic wavelengths”—at which atoms can be trapped and excited into Rydberg states without disturbing them. A new JQI experiment bears out high-precision calculations predicting the existence of specific magic wavelengths.