Controlling a Robotic Arm with a Patient's Intentions 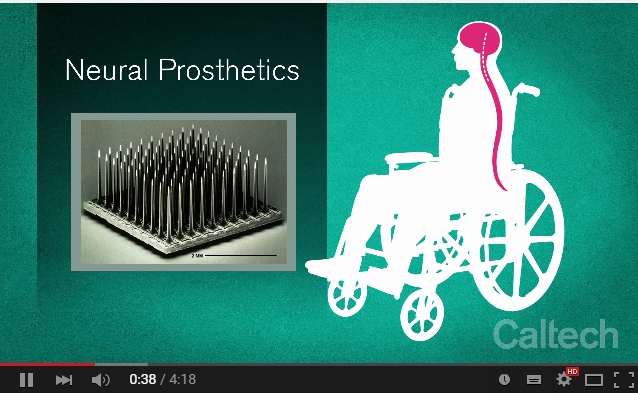 (May 21, 2015)  Neural prosthetic devices implanted in the brain's movement center, the motor cortex, can allow patients with amputations or paralysis to control the movement of a robotic limb—one that can be either connected to or separate from the patient's own limb. However, current neuroprosthetics produce motion that is delayed and jerky—not the smooth and seemingly automatic gestures associated with natural movement. Now, by implanting neuroprosthetics in a part of the brain that controls not the movement directly but rather our intent to move, Caltech researchers have developed a way to produce more natural and fluid motions.

In a clinical trial, the Caltech team and colleagues from Keck Medicine of USC have successfully implanted just such a device in a patient with quadriplegia, giving him the ability to perform a fluid hand-shaking gesture and even play "rock, paper, scissors" using a separate robotic arm.