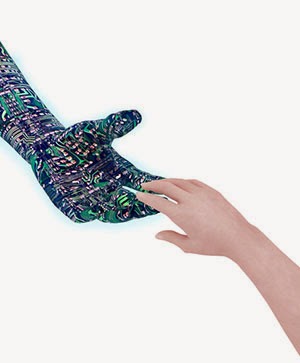 (May 14, 2015)  To the nearly 2 million people in the United States living with the loss of a limb, including U.S. military veterans, prosthetic devices provide restored mobility, yet lack sensory feedback. A team of engineers and researchers at Washington University in St. Louis is working to change that so those with upper limb prosthetics can feel hot and cold and the sense of touch through their prosthetic hands.

Daniel Moran, PhD, professor of biomedical engineering in the School of Engineering & Applied Science and of neurobiology, of physical therapy and of neurological surgery at Washington University School of Medicine in St. Louis, has received a three-year, nearly $1.9 million grant from the Defense Advanced Research Projects Agency (DARPA) to test a novel device developed in his lab that would stimulate the nerves in the upper arm and forearm. If it works, upper-limb amputees who use motorized prosthetic devices would be able to feel various sensations