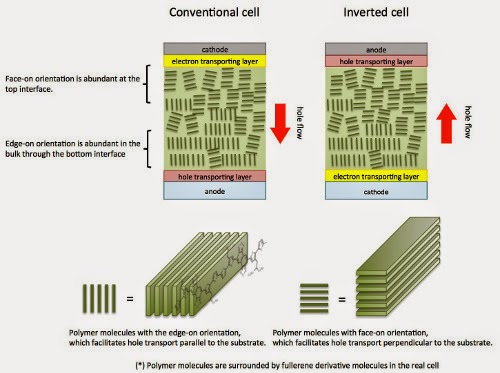 (May 25, 2015)  Polymer solar cells are a hot area of research due to both their strong future potential and the significant challenges they pose. It is believed that thanks to lower production costs, they could become a viable alternative to conventional solar cells with silicon substrates when they achieve a power conversion efficiency—a measure that indicates how much electricity they can generate from a given amount of sunlight—of between 10 and 15 percent. Now, using carefully designed materials and an “inverted” architecture, a team of scientists has achieved efficiency of 10 percent, bringing these cells close to the threshold of commercial viability.

Polymer-based solar cells offer a number of potential advantages. They are made of polymers that are inexpensive and flexible, and can be deposited on glass or plastic substrates, allowing the construction of large-scale structures. They are cheaper to manufacture, and more environmentally-friendly, than their silicon counterparts. Unfortunately, they have lower power efficiency due to their structure and also tend to degrade more quickly.