Could a Robotic Skateboard Defeat Tony Hawk? One Day, Maybe 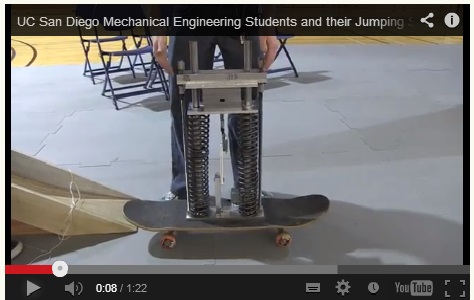 Engineering Students Teach Children About the Physics of Skateboarding

“Five! Four! Three! Two! One!” A robotic skateboard soared high into the air and above Paul Schmitt, a scientist and skateboard designer, then landed with a thud on the floor of the Main Gym on the UC San Diego campus on Monday, March 18.

It was all part of a San Diego Science and Engineering Festival event designed to show that science is cool. The robotic skateboard was created by a team of UC San Diego seniors studying mechanical engineering. They had to understand the physics of skateboarding, design the robot, run simulations that would predict how it would perform and build it. The project is part of the capstone design course for the Department of Mechanical and Aerospace Engineering at UC San Diego.