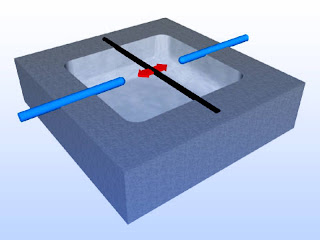 Carbon nanotubes can be used as quantum bits for quantum computers. A study by physicists at the Technische Universitaet Muenchen (TUM) has shown how nanotubes can store information in the form of vibrations. Up to now, researchers have experimented primarily with electrically charged particles. Because nanomechanical devices are not charged, they are much less sensitive to electrical interference.

Using quantum mechanical phenomena, computers could be much more powerful than their classical digital predecessors. Scientists all over the world are working to explore the basis for quantum computing. To date most systems are based on electrically charged particles that are held in an "electromagnetic trap." A disadvantage of these systems is that they are very sensitive to electromagnetic interference and therefore need extensive shielding. Physicists at the Technische Universitaet Muenchen have now found a way for information to be stored and quantum mechanically processed in mechanical vibrations.

A carbon nanotube that is clamped at both ends can be excited to oscillate.