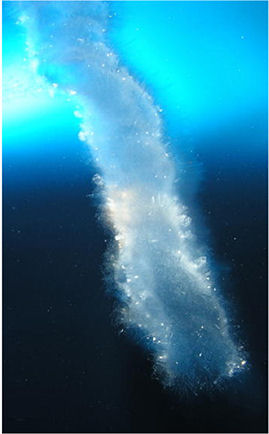 Life on Earth may have originated not in warm tropical seas, but with weird tubes of ice — sometimes called “sea stalactites” — that grow downward into cold seawater near the Earth's poles, scientists are reporting. Their article on these “brinicles” appears in ACS’ journal Langmuir.

Bruno Escribano and colleagues explain that scientists know surprisingly little about brinicles, which are hollow tubes of ice that can grow to several yards in length around streamers of cold seawater under pack ice. That’s because brinicles are difficult to study. The scientists set out to gather more information on the topic with an analysis of the growth process of brinicles.