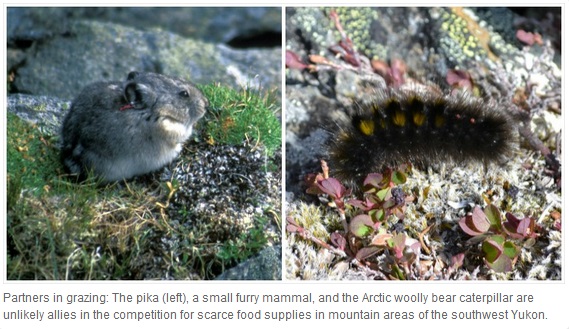 Who would have thought that two very different species, a small insect and a furry alpine mammal, would develop a shared food arrangement in the far North?

University of Alberta researchers were certainly surprised when they discovered the unusual response of pikas to patches of vegetation that had previously been grazed on by caterpillars from a species normally found in the high Arctic.

U of A biology researcher Isabel C. Barrio analyzed how two herbivores, caterpillars and pikas, competed for scarce vegetation in alpine areas of the southwest Yukon. The caterpillars come out of their winter cocoons and start consuming vegetation soon after the snow melts in June. Weeks later, the pika starts gathering and storing food in its winter den. For the experiment, Barrio altered the numbers of caterpillars grazing on small plots of land surrounding pika dens.