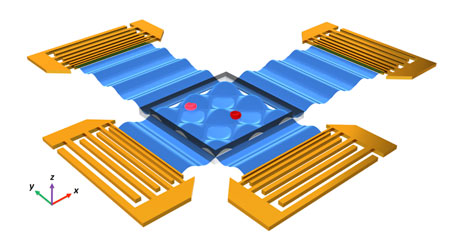 (June 28, 2012)  A team of bioengineers and biochemists from Penn State University has demonstrated a device about the size of a dime that is capable of manipulating objects, including living materials such as blood cells and entire small organisms, using sound waves. Their research is published online this week in the Proceedings of the National Academy of Sciences (PNAS).

The device, called acoustic tweezers, is the first technology capable of touchlessly trapping and manipulating Caenorhabditis elegans (C. elegans), a one millimeter long roundworm that is an important model system for studying diseases and development in humans. Acoustic tweezers are also capable of precisely manipulating cellular-scale objects that are essential to many areas of fundamental biomedical research.