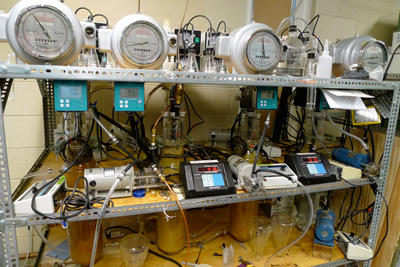 At Cornell, researchers are turning beer into biofuel.

(June 28, 2012)  It's not the beer that's good to drink -- but fermentation broth, which is chemically identical to the imbibing beer, from which the fuel ethanol is produced.

Using a mixed bag of microbes for specific chemical reactions, biological engineers have designed a process for upgrading ethanol into something even better -- caproic acid, a carboxylic acid that's a versatile fuel precursor. If scaled up, their process could integrate seamlessly into already-established ethanol production lines.