Evidence of oceanic ‘green rust’ offers hope for the future 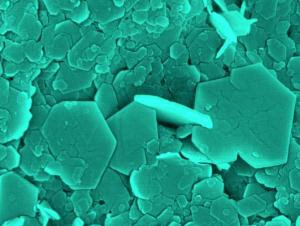 Evidence of oceanic ‘green rust’ offers hope for the future

(June 28, 2012)  A rare kind of mineral which scientists hope could be used to remove toxic metals and radioactive species from the environment played a similar, crucial role early in Earth’s history.
Research carried out by an international team of leading biogeochemists suggests for the first time that ‘green rust’ was likely widespread in ancient oceans and may have played a vital role in the creation of our early atmosphere.

Led by Newcastle University, UK, the study shows that during the Precambrian period, green rust ‘scavenged’ heavy metals such as nickel out of the water. Nickel availability is linked to the production of methane by anaerobic organisms, which is a major sink for oxygen produced during photosynthesis, and thus green rust played a crucial role in the oxygenation of the Earth’s atmosphere.