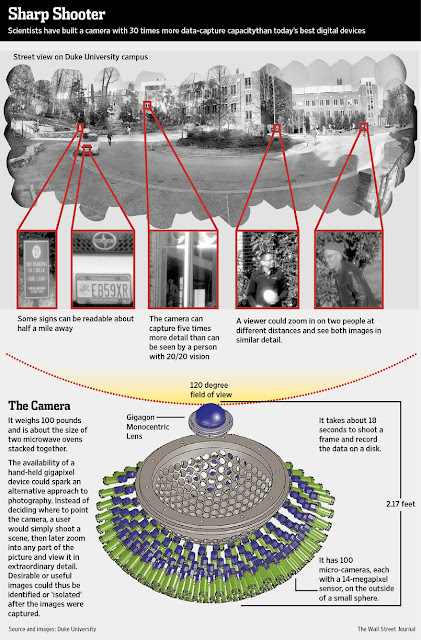 (June 20, 2012)  By synchronizing 98 tiny cameras in a single device, electrical engineers from Duke University and the University of Arizona have developed a prototype camera that can create images with unprecedented detail.

The camera’s resolution is five times better than 20/20 human vision over a 120 degree horizontal field.

The new camera has the potential to capture up to 50 gigapixels of data, which is 50,000 megapixels. By comparison, most consumer cameras are capable of taking photographs with sizes ranging from 8 to 40 megapixels. Pixels are individual “dots” of data – the higher the number of pixels, the better resolution of the image.

The researchers believe that within five years, as the electronic components of the cameras become miniaturized and more efficient, the next generation of gigapixel cameras should be available to the general public.
Details of the new camera were published online in the journal Nature. The team’s research was supported by the Defense Advanced Research Projects Agency (DARPA).

The camera was developed by a team led by David Brady, Michael J. Fitzpatrick Professor of Electric Engineering at Duke’s Pratt School of Engineering, along with scientists from the University of Arizona, the University of California – San Diego, and Distant Focus Corp.