Space tornadoes power the atmosphere of the Sun 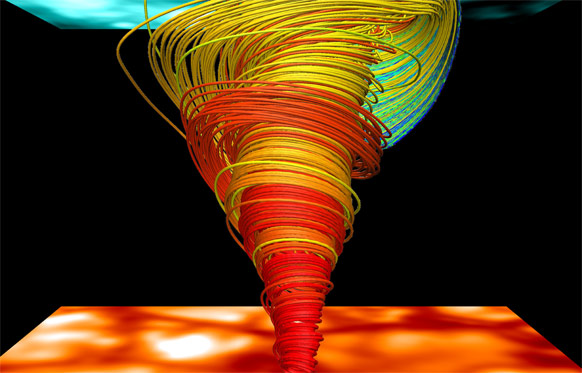 (June 28, 2015)  Mathematicians at the University of Sheffield, as part of an international team, have discovered tornadoes in space which could hold the key to power the atmosphere of the Sun to millions of kelvin.

The super tornadoes - which are thousands of times larger and more powerful than their earthly counterparts but which have a magnetic skeleton - spin at speeds of more than 6,000 mph at temperatures in millions of centigrade in the Sun’s atmosphere.

They are more than 1,000 miles wide – hundreds of miles longer than the total distance between Land’s End to John O’Groats. It is estimated that there are as many as 11,000 of these swirling events above the Sun’s surface at any time.