Robots Get a Feel for the World at USC Viterbi 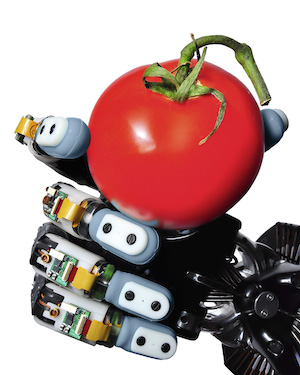 What does a robot feel when it touches something? Little or nothing until now. But with the right sensors, actuators and software, robots can be given the sense of feel - or at least the ability to identify materials by touch.

Researchers at the University of Southern California’s Viterbi School of Engineering published a study today in Frontiers in Neurorobotics showing that a specially designed robot can outperform humans in identifying a wide range of natural materials according to their textures, paving the way for advancements in prostheses, personal assistive robots and consumer product testing.

The robot was equipped with a new type of tactile sensor built to mimic the human fingertip. It also used a newly designed algorithm to make decisions about how to explore the outside world by imitating human strategies. Capable of other human sensations, the sensor can also tell where and in which direction forces are applied to the fingertip and even the thermal properties of an object being touched.