Bringing down the cost of fuel cells 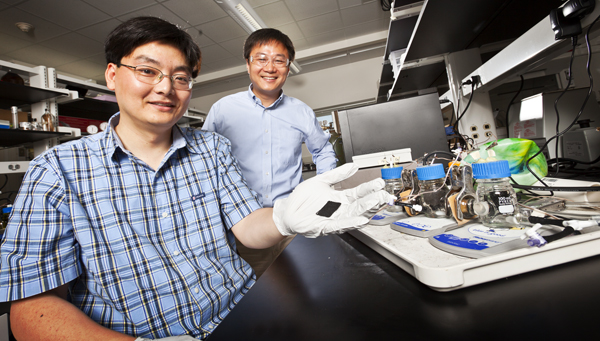 (June 24, 2012) Engineers at the University of Wisconsin-Milwaukee (UWM) have identified a  catalyst that provides the same level of efficiency in microbial fuel cells (MFCs) as the currently used platinum catalyst, but at 5% of the cost.

Since more than 60% of the investment in making microbial fuel cells is the cost of platinum, the discovery may lead to much more affordable energy conversion and storage devices.

The material – nitrogen-enriched iron-carbon nanorods – also has the potential to replace the platinum catalyst used in hydrogen-producing microbial electrolysis cells (MECs), which use organic matter to generate a possible alternative to fossil fuels.

“Fuel cells are capable of directly converting fuel into electricity,” says UWM Professor Junhong Chen, who created the nanorods and is testing them with Assistant Professor Zhen (Jason) He. “With fuel cells, electrical power from renewable energy sources can be delivered where and when required, cleanly, efficiently and sustainably.”

The scientists also found that the nanorod catalyst outperformed a graphene-based alternative being developed elsewhere. In fact, the pair tested the material against two other contenders to replace platinum and found the nanorods’ performance consistently superior over a six-month period.