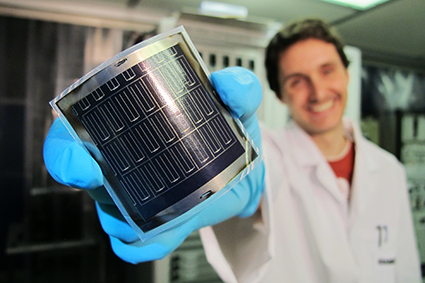 In a remarkable feat, scientists at Empa, the Swiss Federal Laboratories for Materials Science and Technology, have developed thin film solar cells on flexible polymer foils with a new record efficiency of 20.4% for converting sunlight into electricity. The cells are based on CIGS semiconducting material (copper indium gallium (di)selenide) known for its potential to provide cost-effective solar electricity. The technology is currently awaiting scale-up for industrial applications.

To make solar electricity affordable on a large scale, scientists and engineers the world over have long been trying to develop a low-cost solar cell, which is both highly efficient and easy to manufacture with high throughput. Now a team at Empa's Laboratory for Thin Film and Photovoltaics, led by Ayodhya N. Tiwari, has made (yet another) leap ahead. They achieved a record 20.4% energy conversion efficiency for thin film CIGS solar cells on flexible polymer substrates, a massive improvement over the previous record of 18.7% achieved by the same team in May 2011. Tiwari’s team has been investigating and developing various thin film solar cell technologies for some time. Over the years the laboratory has boosted the photovoltaic conversion efficiency of flexible CIGS solar cells time and again, from 12.8% in 1999 – the group’s first world record – to 14.1% in 2005, 17.6% in 2010 and 18.7% in 2011.