U of A physics team cracks 100 year old mystery 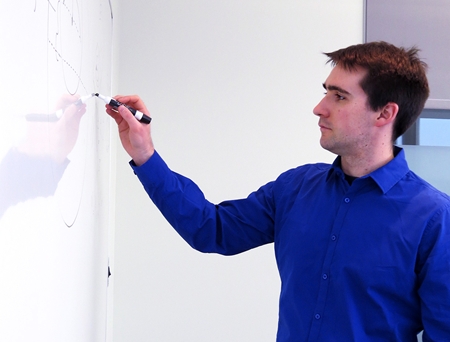 What happens when you combine the uber-tenacity of star physics students with new nano engineering tools? You find the key to a century-old scientific challenge.

You might describe physics as a science discipline with a very high barrier to entry; drawing on tools like advanced math, bleeding edge computational modeling and emergent platforms like nano technology.

These highly complex considerations take the form of some very challenging questions. Take for example, the Barkhausen effect.  Barkhausen offered science a seminal experiment in 1919 that provided the first evidence of magnetic domains – or the quilt-like patterns in the orientation of "magnetization" within magnetic materials.  Barkhausen made the discovery by listening in on magnetic activity by wrapping a magnet with an electrical coil – connected to a speaker. The messages Barkhausen received were intermittent and idiosyncratic and impossible to translate until now. After almost 100 years of trying, a U of A science team has cracked the code.