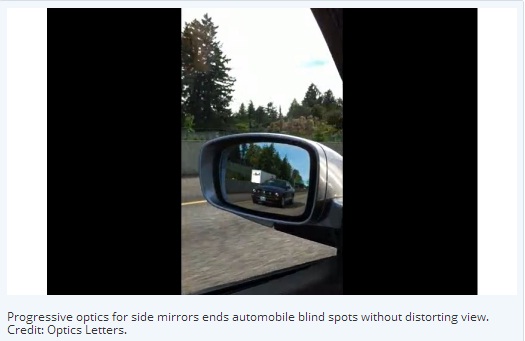 A new optical prescription for automobile side-view mirrors may eliminate the dreaded "blind spot" in traffic without distorting the perceived distance of cars approaching from behind. As described in a paper published today in the Optical Society’s (OSA) journal Optics Letters, objects viewed in a mirror using the new design appear larger than in traditional side-view mirrors, so it’s easier to judge their following distance and speed.

Today's motor vehicles in the United States use two different types of mirrors for the driver and passenger sides. The driver's side mirror is flat so that objects viewed in it are undistorted and not optically reduced in size, allowing the operator to accurately judge an approaching-from-behind vehicle's separation distance and speed. Unfortunately, the optics of a flat mirror also create a blind spot, an area of limited vision around a vehicle that often leads to collisions during merges, lane changes, or turns. The passenger side mirror, on the other hand, possesses a spherical convex shape. While the small radius of curvature widens the field of view, it also causes any object seen in it to look smaller in size and farther away than it actually is.