Asians are far more likely than Anglos to be college-educated, according to the Houston Area Asian Survey 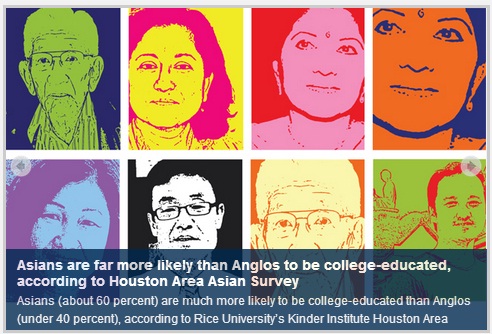 Asians (about 60 percent) are much more likely to be college-educated than Anglos (under 40 percent), according to Rice University’s Kinder Institute Houston Area Asian Survey, the first systematic look at the local Asian population based on three surveys conducted over a 16-year period. The findings were released today by Stephen Klineberg, Kinder Institute co-director and Rice sociologist, at an event hosted by the institute at the Asia Society Texas Center.

The surveys, conducted in 1995, 2002 and 2011 in conjunction with the annual Kinder Institute Houston Area Survey, directed questions about demographics, life experiences and societal issues to all of Houston’s varied Asian communities. The surveys explored the similarities and differences among the Houston area’s four largest Asian communities: the Vietnamese, Indian/Pakistani, Chinese/Taiwanese and Filipino populations.