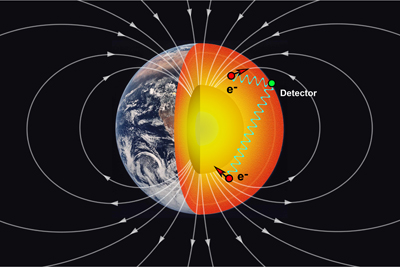 In a breakthrough for the field of particle physics, Professor of Physics Larry Hunter and colleagues at Amherst and The University of Texas at Austin have established new limits on what scientists call “long-range spin-spin interactions” between atomic particles. These interactions have been proposed by theoretical physicists but have not yet been seen. Their observation would constitute the discovery of a “fifth force of nature” (in addition to the four known fundamental forces: gravity, weak, strong and electromagnetic) and would suggest the existence of new particles, beyond those presently described by the Standard Model of particle physics.

The new limits were established by considering the interaction between the spins of laboratory fermions (electrons, neutrons and protons) and the spins of the electrons within Earth. To make this study possible, the authors created the first comprehensive map of electron polarization within Earth induced by the planet’s geomagnetic field.