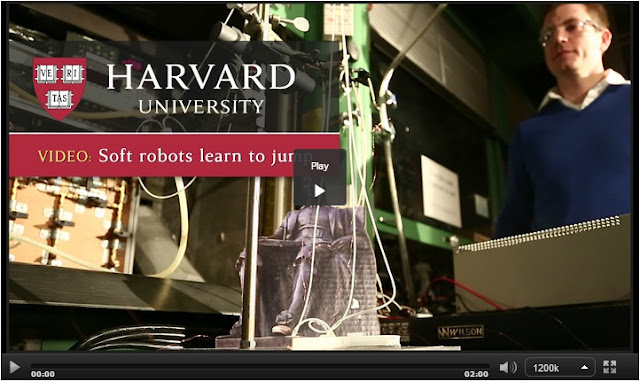 They can already stand, walk, wriggle under obstacles, and change colors. Now researchers are adding a new skill to the soft robot arsenal: jumping.

Using small explosions produced by a mix of methane and oxygen, researchers at Harvard have designed a soft robot that can leap as much as a foot in the air. That ability to jump could one day prove critical in allowing the robots to avoid obstacles during search and rescue operations. The research is described in a Feb. 6 paper in the international edition of Angewandte Chemie.

“Initially, our soft robot systems used pneumatic pressure to actuate,” said Robert Shepherd, first author of the paper, former postdoctoral researcher in the Whitesides Research Group at Harvard, and now an assistant professor at Cornell. “While that system worked, it was rather slow — it took on the order of a second. Using combustion, however, allows us to actuate the robots very fast. We were able to measure the speed of the robot’s jump at 4 meters per second.”