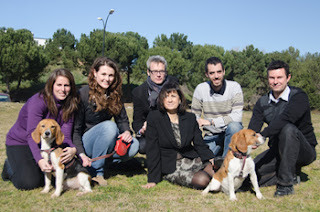 Researchers at the Universitat Autònoma de Barcelona have succeeded in completely curing type 1 diabetes in dogs with a single session of gene therapy. This is the first time that the disease has been cured in large animals, a fundamental step towards applying the therapy in humans. The study, based on introducing a "glucose sensor" into muscle, has been published in Diabetes, the most prestigious journal in this field.

Researchers from the Universitat Autònoma de Barcelona (UAB), led by Fàtima Bosch, have shown for the first time that it is possible to cure diabetes in large animals with a single session of gene therapy. As published this week in Diabetes, the principal journal for research on the disease, after a single gene therapy session, the dogs recover their health and no longer show symptoms of the disease. In some cases, monitoring continued for over four years, with no recurrence of symptoms.