Team Creates MRI for the Nanoscale 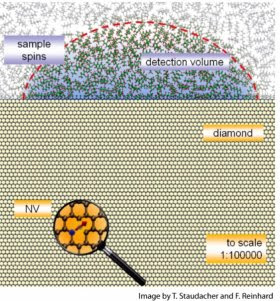 Magnetic resonance imaging (MRI) reveals details of living tissues, diseased organs and tumors inside the body without x-rays or surgery. What if the same technology could peer down to the level of atoms? Doctors could make visual diagnoses of a person’s molecules – examining damage on a strand of DNA, watching molecules misfold, or identifying a cancer cell by the proteins on its surface.

Now Dr. Carlos Meriles, associate professor of physics at The City College of New York, and an international team of researchers at the University of Stuttgart and elsewhere have opened the door for nanoscale MRI. They used tiny defects in diamonds to sense the magnetic resonance of molecules. They reported their results in the February 1 issue of Science.