A 'hydrothermal siphon' drives water circulation through the seafloor 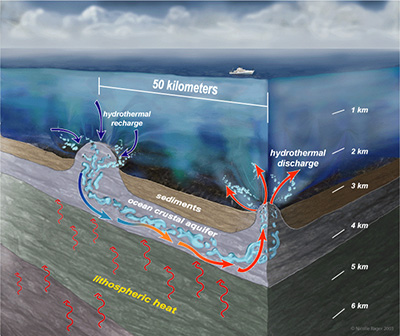 (June 26, 2015)  Vast quantities of ocean water circulate through the seafloor, flowing through the volcanic rock of the upper oceanic crust. A new study by scientists at UC Santa Cruz, published June 26 in Nature Communications, explains what drives this global process and how the flow is sustained.

About 25 percent of the heat that flows out of the Earth's interior is transferred to the oceans through this process, according to Andrew Fisher, professor of Earth and planetary sciences at UC Santa Cruz and coauthor of the study. Much of the fluid flow and heat transfer occurs through thousands of extinct underwater volcanoes (called seamounts) and other locations where porous volcanic rock is exposed at the seafloor.