Microalgae – produced on a commercial scale 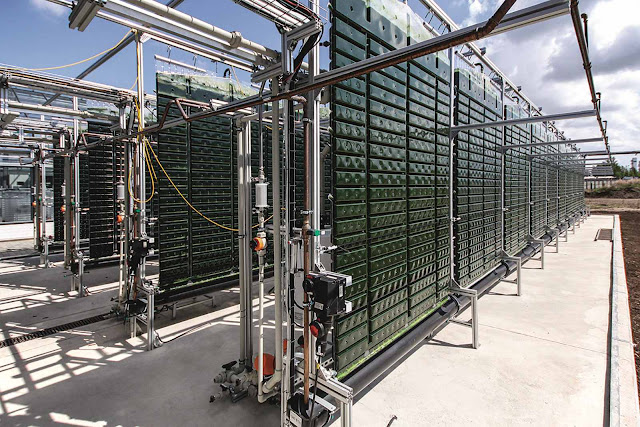 (June 15, 2015)  Many products, including food supplements, cosmetics and biodiesel, are made from substances derived from microalgae. A fully automated pilot plant operated by Fraunhofer in Leuna is capable of producing microalgae on pilot scale. The concentration of algae in its reactors is five times higher than in conventional closed reactors. The researchers who designed the plant will be exhibiting it at the ACHEMA 2015 show in Frankfurt am Main from June 15 to 19 (Hall 9.2, Booth D64).

Microalgae are highly versatile organisms. Some strains, for instance, produce large quantities of omega-3 fatty acids that have important health-giving properties, and are therefore used in the composition of food supplements. Many ingredients in cosmetic products are also derived from algae, such as the red pigment astaxanthin which is extracted from the algal strain Haematococcus pluvialis. Other strains of microalgae produce oils or starch that can be used to manufacture biodiesel, ethanol or biogas. But the microalgae from which all of these products are derived are grown almost exclusively by American, Israeli or Asian companies – there are only few commercial production facilities in Europe. In Asia, the aquatic organisms are mainly cultivated in open ponds. But the quantity of algae that can be harvested from these ponds is limited because they need light to grow, and sunlight rarely penetrates beyond the first few inches deep in the water body. Finally, there is the constant risk that the algae might be contaminated by other microorganisms.