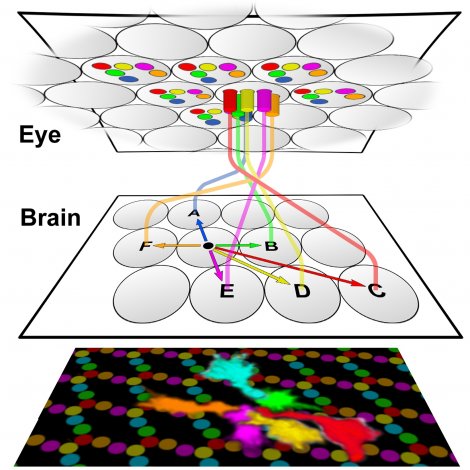 (June 25, 2015)  Think the rat’s nest of cables under your desk is bad? Try keeping the trillions of connections crisscrossing your brain organized and free of tangles. A new study coauthored by researchers at UC San Francisco and the Freie Universität Berlin reveals this seemingly intractable job may be simpler than it appears.

The researchers used high-resolution time-lapse imaging of the developing brains of pupal fruit flies (Drosophila melanogaster) paired with mathematical simulations to unravel a trick of neural wiring that had stumped neuroscientists for decades. They discovered three simple rules that may explain how the complicated visual system of the humble fruit fly – with its eight-hundred-lens compound eyes – self-organizes as it grows. The authors said a similar approach could one day help us understand the rules governing the development of our own, much more complex brains.

The paper, titled, “The Developmental Rules of Neural Superposition in Drosophila,” appears online June 25 ahead of print in the July 2 issue of the journal Cell.