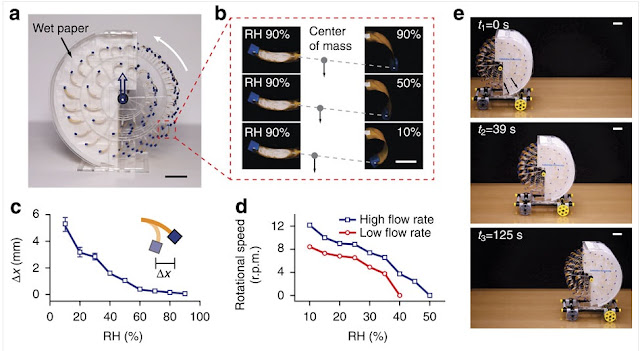 Abstract
(June 16, 2015) Evaporation is a ubiquitous phenomenon in the natural environment and a dominant form of energy transfer in the Earth’s climate. Engineered systems rarely, if ever, use evaporation as a source of energy, despite myriad examples of such adaptations in the biological world. Here, we report evaporation-driven engines that can power common tasks like locomotion and electricity generation. These engines start and run autonomously when placed at air–water interfaces. They generate rotary and piston-like linear motion using specially designed, biologically based artificial muscles responsive to moisture fluctuations. Using these engines, we demonstrate an electricity generator that rests on water while harvesting its evaporation to power a light source, and a miniature car (weighing 0.1 kg) that moves forward as the water in the car evaporates. Evaporation-driven engines may find applications in powering robotic systems, sensors, devices and machinery that function in the natural environment.