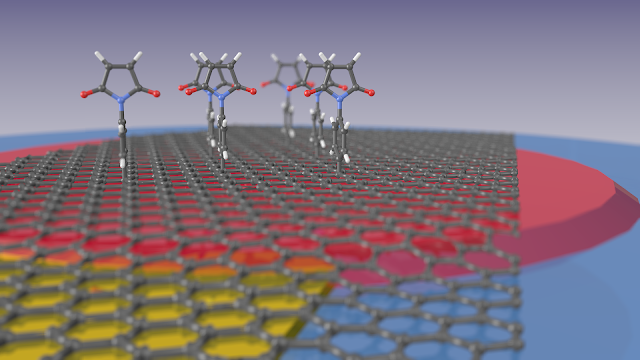 (June 24, 2015)  For the first time, a team of scientists has succeeded in precisely measuring and controlling the thickness of an organic compound that has been bound to a graphene layer. This might enable graphene to be used as a sensitive detector for biological molecules in the future.

Pure carbon occurs in many forms. Besides the classical configurations found in diamonds, graphite, and coal, there are other younger exotic cousins such as graphene. Its structure resembles a honeycomb – a hexagonal mesh with a carbon atom at every corner – that is only a single atomic layer thick. Hence, it is essentially two-dimensional. As a result, graphene is extremely conductive, completely transparent, and quite resilient both chemically and mechanically.

Graphene is not very selective

It has long been known that graphene is also fundamentally suited to detecting traces of organic molecules. This is because the electrical conductivity of graphene drops as soon as foreign molecules bind to it. The problem, though, is that this happens with almost every molecule. Graphene is not very selective, which makes it very difficult to differentiate molecules. Therefore, it cannot be used as a sensor.