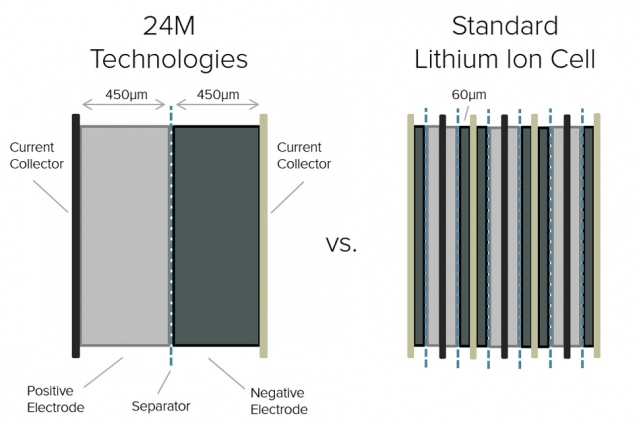 Reinventing how these batteries are made also improves their performance and recyclability.

(June 23, 2015)  An advanced manufacturing approach for lithium-ion batteries, developed by researchers at MIT and at a spinoff company called 24M, promises to significantly slash the cost of the most widely used type of rechargeable batteries while also improving their performance and making them easier to recycle.

“We’ve reinvented the process,” says Yet-Ming Chiang, the Kyocera Professor of Ceramics at MIT and a co-founder of 24M (and previously a co-founder of battery company A123). The existing process for manufacturing lithium-ion batteries, he says, has hardly changed in the two decades since the technology was invented, and is inefficient, with more steps and components than are really needed.

The new process is based on a concept developed five years ago by Chiang and colleagues including W. Craig Carter, the POSCO Professor of Materials Science and Engineering. In this so-called “flow battery,” the electrodes are suspensions of tiny particles carried by a liquid and pumped through various compartments of the battery.