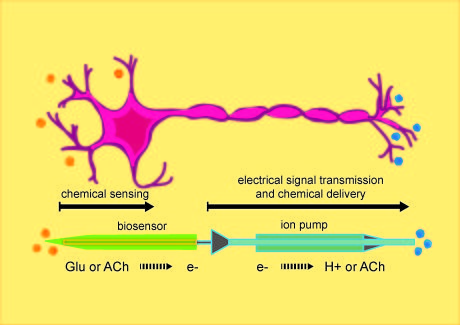 (June 24, 2015)  Scientists at Sweden’s Karolinska Institutet have managed to build a fully functional neuron by using organic bioelectronics. This artificial neuron contain no ‘living’ parts, but is capable of mimicking the function of a human nerve cell and communicate in the same way as our own neurons do.

To date, the primary technique for neuronal stimulation in human cells is based on electrical stimulation. However, scientists at the Swedish Medical Nanoscience Centre (SMNC) at Karolinska Institutet in collaboration with collegues at Linköping University, have now created an organic bioelectronic device that is capable of receiving chemical signals, which it can then relay to human cells.

“Our artificial neuron is made of conductive polymers and it functions like a human neuron”, says lead investigator Agneta Richter-Dahlfors, professor of cellular microbiology.  “The sensing component of the artificial neuron senses a change in chemical signals in one dish, and translates this into an electrical signal. This electrical signal is next translated into the release of the neurotransmitter acetylcholine in a second dish, whose effect on living human cells can be monitored.“