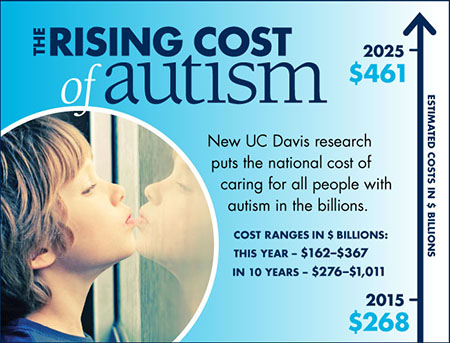 (July 29, 2015)  UC Davis health economists have for the first time projected the total costs of caring for all people with autism spectrum disorder (ASD) in the U.S. for the current calendar year and in 10 years if effective interventions and preventive treatments for the condition are not identified and widely available.

Their forecasts for ASD-related medical, nonmedical and productivity losses are $268 billion for 2015 and $461 billion for 2025. The researchers noted that these estimates are conservative and, if ASD prevalence continues to increase as it has in recent years, the costs could reach $1 trillion by 2025.

The study is published online in the Journal of Autism and Developmental Disorders.

“The current costs of ASD are more than double the combined costs of stroke and hypertension and on a par with the costs of diabetes,” said study senior author Paul Leigh, professor of public health sciences and researcher with the Center for Healthcare Policy and Research at UC Davis. “There should be at least as much public, research and government attention to finding the causes and best treatments for ASD as there is for these other major diseases.”

Leigh hopes his findings inspire policy changes that emphasize early intervention to reduce ASD symptoms, along with employment and other programs that support the independence of adults with the disorder.